Return to Essays and Issues

Return to ABT Home

Ed. note: Dr. James Crumpton pastored the Westside Baptist Church in Natchez, Mississippi from 1947 to 1998. For over 50 years he was a staunch defender of the faith, a preacher extraordinaire, and a founder of the Maranatha Baptist Mission. Maranatha was organized in 1961 and was a pioneer Mission organization started to send missionaries independent of the Southern Baptist Convention. Over 100 men surrendered to preach under Dr. Crumpton, nearly 300 went to the mission field. [THIS ARTICLE WAS FIRST POSTED ON “CUTTING EDGE” IN DECEMBER OF 2000] 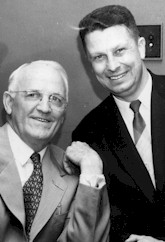 Dr. Crumpton with
the incomparable R. G. Lee
at the time of the 1958
Natchez citywide campaign

It was one of those great things in life that after it was over, you had to remind yourself, “It really happened.”

I traveled down to Natchez, Mississippi to interview Dr. James Crumpton, longtime servant of God and pioneer in the Independent Baptist movement. I went for several reasons: 1. I felt the need to meet this man whom I had heard so many wonderful things about through the years. The mission board Dr. Crumpton founded was the sending board of Larry and Betty Parshall, missionaries to Australia from our church. 2. I have been doing some writing on Baptist history and Dr. Crumpton is a living history of our movement in the 20th Century.

Dr. Crumpton has been friends of R.G. Lee, Lee Roberson, Jack Hyles, Mordeci Ham, J. Harold Smith, Percy Ray, W. A. Criswell and a host of other fundamental Baptists in this century.

Dr. Crumpton’s son, James Jr. happened to be in Natchez when I was able to come down and helped me with some of the details of his father’s life and ministry. Although I felt that Dr. Crumpton was fairly sharp, his family sees a decline in his health and the effects of aging settling in. He is now in his early 80’s.

I was struck with his dignity.  I recalled how George Dollar in his book, A History of Fundamentalism described him:

He began to tell about his salvation and call to preach. Fork Shoal Baptist Church in South Carolina was the place of his salvation. The year was 1935 and within a few days he surrendered to preach. All of this was under the leadership of a liberal pastor.

Dr. Crumpton went to Furman University, and finished but he could remember well the faculty making fun of the standards of the word of God. He decided to head to New Orleans and study under the Bible believing bunch at Baptist Bible Institute.

I asked a few pointed questions and I soon arrived at the destination of Natchez, Mississippi where our soldier stayed in the trenches for over 50 years.

My main curiosity had to do with his becoming an independent. How did he “become” a fundamentalist? We second generation independent fundamental Baptists are always wondering about that. We think in terms of being separated as a conscious choice consisting of walking away  from the body that is offending and insulting the word of God.

I wanted to know how he left the Convention, or was he kicked out? When did he walk away and why? There had to be a definite time and place.

Well, I couldn’t get a definitive answer. However, the real answer was better than the one I was dreaming about.

The Crumptons were not in contact with very many “independents”. In those days they were few. But the believers in the convention were raising a ruckus inside the house of the SBC. They conferenced, they preached, they exposed the seminaries, they made the status quo pretty mad. And then the co-operative program came along. Dr. Crumpton said that the SBC was a group of independent churches until the co-operative program made you a Southern Baptist by monetary co-operation. That monetary co-operation mostly had to do with missions.

The truth of the waste of money from the co-operative program was laid bare by a Brazilian missionary who revealed in a sermon preached at another church, that only 3 cents on every dollar given ever got to the missionary on the field.

If you couple that realization with the SBC missions denial of Mel Rutter to go to South America, and you understand the birth of Maranatha missions.

Mel Rutter would have stayed home against the call of God, if Westside Baptist Church and Dr. James Crumpton, had not acted independently to begin their own mission board. The result: Maranatha Missions was founded It was started out of necessity, so that the will of God could be obeyed and that God’s finances would not be grossly mishandled.

James Crumpton, Jr. told me, “my father never set out to be an independent, fundamental Baptist. He just stood for the truth of the Bible and that’s how he got labeled.”