Return to Essays and Issues

Return to ABT Home

“The Evolution of Baptist Mentality”  by James Beller

The picture at the bottom of this article paints a portrait speaking a multitude of words. In a day of postmodern drab compromise it is difficult to find a single warrior for God who is willing to “cut it straight” and feel the heat of criticism. Our mentality has grown soft as the world around us pressures us to drop our “cultish” standards and abandon “legalistic” practices.

Name changes are a result of politically correct pressure and it effects many areas of life. For instance, in the world of sports, teams have changed names to appease the opinions of the offended. This happened to the Stanford Indians, who became the Stanford Cardinal and going way back, the Cincinnati Reds were known for a short time as the Cincinnati Red Legs. In the world of sociology, things that were bona fide SINS became sicknesses. I.E.: the drunkard became an “alcoholic” and the whoremonger a “sex addict”, and the sodomite became “gay”. Get the picture?

Name changes reflect the change of  heart felt convictions. Mark this: changing a name may either sharpen or soften the mind when thinking of the new name: (How about when those parent murdering Menendez boys from California went from being “psychopathic murderers” to being “victims of child abuse”?)

Baptists are dropping their names all across the country. What are we to think of this?

Baptists in America sprang from the independent flavor of our pilgrim fathers and their main bone of contention with the reformed standing order was infant baptism and baptismal regeneration. Men like Issac Backus and Henry Dunster became convinced that baptism was for believers only and that the ordinance was no “means to grace”. There was break away and schism and independence in the air, but what did they call themselves?

Such schismatics were called all kinds of names through the centuries starting with Tertullian’s adopted sect, the Montanists. Then came along the Novatians and then the hated and hunted Donatists, the first sect christened anabaptist by their enemies. All this happened before the turn of the 4th century. In the dark ages Bible believers were called Albigenses, Paulicians, Bogomils, Waldenses, etc., and then by the 16th century Anabaptists (again).

Well what about our Baptist forefathers in America? What did they call themselves? Our picture below tells us…would you believe…Antipedo Baptist? Wow! The meaning is clear, this is a church that is against infant or unbelieving child baptism.

We saw such indications all throughout the east and south in researching the history of Baptists in America. It meant something to be against infant baptism. It cost something to be opposed to baptismal regeneration. Friends we ought to be ashamed of ourselves to allow the dilution of Bible distinctives such as believer’s baptism and baptism by immersion. If we are Baptist, let us plainly state it. If we are rejecting sprinkling, baptismal regeneration, and covenant theology, let us plainly state it.

Anybody want to start an Antipedo Baptist Church? 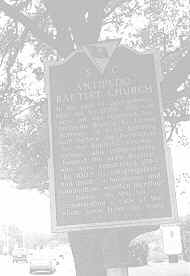